⟨ Back to Our Thinking 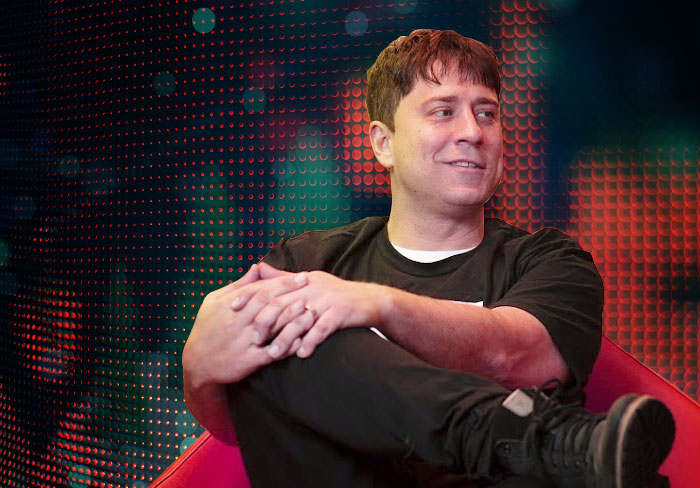 We sat down with Dave Hibel to get his insights into what makes for great design. Our interview covered everything from his views on the most important trends in AV to the most common pitfalls of integrating technology into an event. 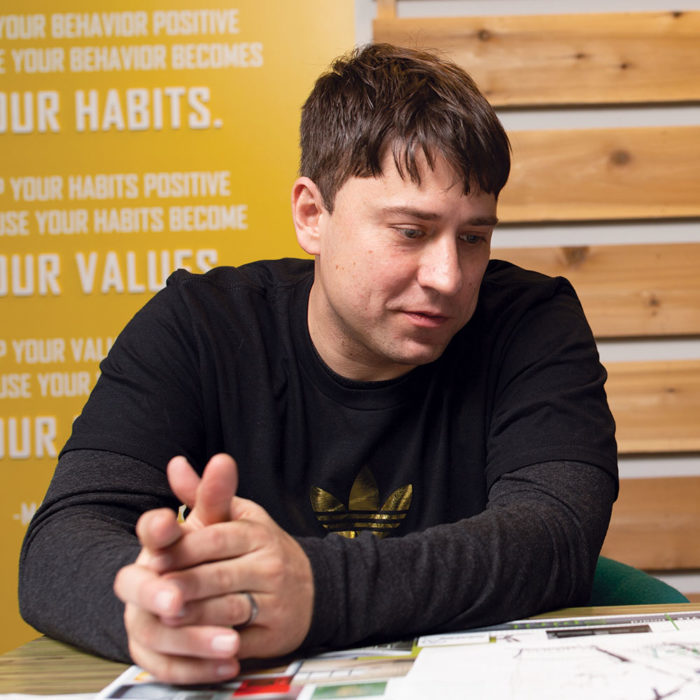 Q: How are people using AV at their events these days?

Dave: LED displays are huge, exhibits are dripping with it. You go to a show, and you can’t help but see large-format LED tiles glowing away. The price point is coming down, and people are getting comfortable working with the product. You see it in a lot of different uses — from very large format imagery and video… to adding color and motion effects… to architectural details like corners and floors. We’ve seen it used as dance floors and as canopies to make an indoor space look like the open sky.

Matrix monitors are popular too. Those are seamless, edge-to-edge monitors that you can combine into a 2x2 or 3x3 wall of video. They have a higher resolution than LED displays, so they are good for close-up applications. But, they aren’t as versatile, and they start to get heavy in larger uses.

So, lots of big motion graphics and imagery is the trend. But it's more than just dropping a mega screen in the middle of every exhibit; the key is integrating the technology with the architecture to support the objectives of the space. Design solutions that weave in technology elegantly and naturally with the rest of the environment have the greatest degree of success in creating memorable experiences.

Q: What do you mean by “integrated well into the experience?”

Dave: Well, it’s all about being purposeful with it. At Motif, that's one standard we always shoot for. You have to ask yourself how to use the LED as more than just a big billboard. How to make it part of the storytelling of the event. How to make sure the content matches both the brand and the architecture of the design. How to build in interactivity or gamification... if that's what it takes to get people engaged and ready to learn about our clients' brands. It takes effort and teamwork, but it makes all the difference.

I'll share my favorite example of getting the most out of LED. Now, it’s not one Motif did, but it makes my point so well. It was an event put on for a major sporting goods brand. And they used an LED display as the entire basketball court. 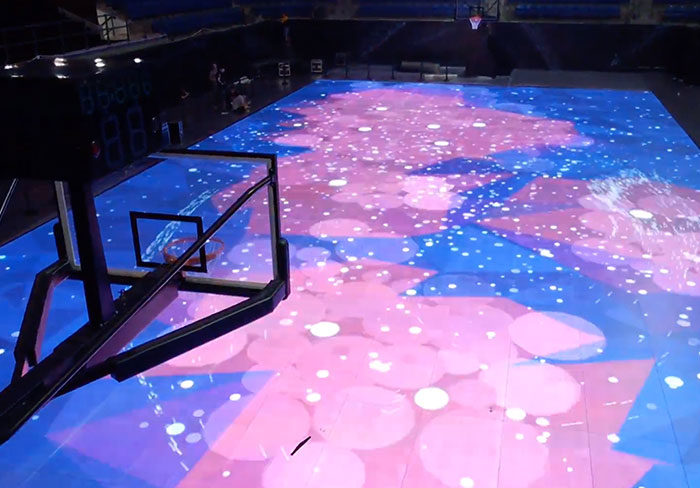 Using LED technology to bring a basketball court to life. Click the photo to see a video of it in action

While the teams were playing, the floor highlighted players and celebrated great plays. When there was a break in the action, the floor would turn into something that didn’t even look like a court. Promotional video. Fun animations. It could be anything they wanted the crowd to see. That is what I mean by “integrating LED into an experience.” The court remained a key part of the action even when the game wasn't in play.

Another good example is what we put together for the world's second largest lighter company, Clipper. In addition to being a truly better lighter, Clipper is also known for their diverse collection of artistic and branded lighters with different finishes and art. We used a cylindrical LED to make a huge replica of a clipper lighter, and then we were able to cycle through the finishes and artwork on the LED. It grabbed a lot of attention, and it did a nice job of showing off the various lighter collections. 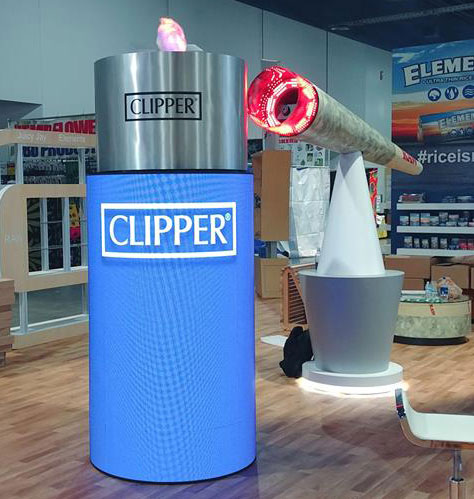 Using a cylindrical LED screen to make a super-sized replica of a Clipper lighter let us highlight all the product finishes while grabbing the attention of attendees.

Q: Outside of displays and monitors, any other trends?

Dave: Definitely a lot of augmented reality. We just did a project for Mitsubishi. It was a large mural graphic that came to life as booth visitors came in. We did another one in Germany just recently with AMF. We set up an augmented reality solution for training purposes. You’re looking at the model of one of their machines through your phone. And on your screen, it launches set-up instructions or details of the product line.

One of the best augmented reality solutions I’ve seen lately was done by a technology partner of ours. It was kind of “reverse augmented reality” because you didn’t interact with your phone, you interacted with the product. And that interaction brought information to life. It was a shoe company. Sitting on podiums in front of screens was a new line of shoes. Each shoe had a sensor on the sole. When you interacted with the shoe, a big avatar of the shoe appeared on the screen and moved in unison with the real shoe. But on the avatar, all kinds of selling information appeared synced to what you were looking at in real life. People just wanted to play with it. And they were learning while they had fun. 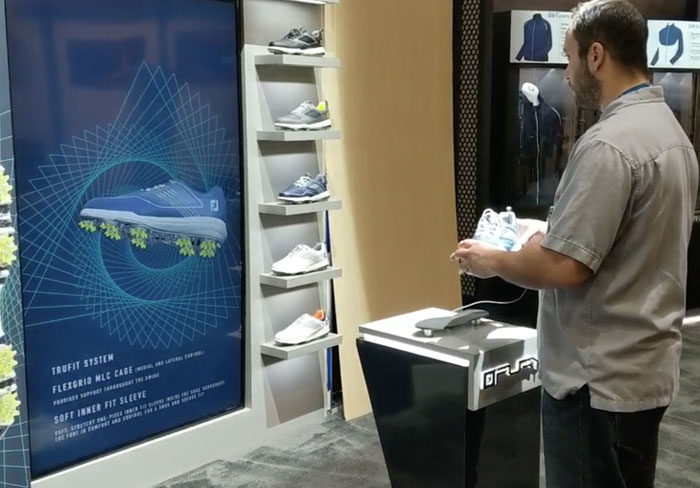 "Reverse" augmented reality with a motion-sensor chip on the sole of a shoe.

Another cool trend is large format touch screen technology. It’s another thing that brings people in. We did a cool one for Goldwind. It was a 20-foot-wide Transparent Projection Touch Screen with 3D interactive windmills. You could virtually rotate these massive windmills around in your hands, zoom out, zoom in, and touch hot spots for x-ray views of the mechanics. People were all over it. And, it was part of an overall experience that included two Matrix Video walls, and the tech to do a live press conference from inside the exhibit space. All combined it was very impressive in a way that did not overwhelm visitors. 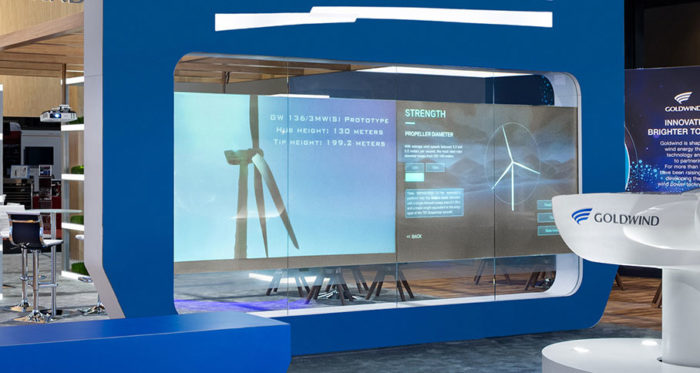 Dave: Most of the fails I see have to do with content. Mainly, focusing too much on the tech and not focusing on the content. You can’t forget the big picture. The biggest and greatest tech in the world won't help you if you don't have a story to tell. The name of the game is engagement, right? Tech needs to be used to get people seeing things that they can’t see in person: good stories, rich details, clear functions — telling that story interactively, so people are touching and relating with your brand and giving you feedback. Right? Tech is a way to educate and inspire and gain measurement at the same time.

Q: You said “touching.” How do you see touch screens evolving? Are you seeing them becoming more involved in shows?

Dave: They are the standard. You see them in almost every show. Interactive screens are very important. They help attendees and help people who are working the shows to guide people through the story, support the story and gather feedback. They are also huge for lead retrieval and measurement. You see a lot of electronic literature on them, so people aren’t handing out pamphlets. When e-literature is dispersed digitally. We help our clients cut down on waste and cost. It’s not super new, but it’s continuing to move in the right direction. You do see touch screens at almost every solution in every booth.

Q: What tech do you have in-house and what do you generally plan to work with partners on?

Dave: You know what, we try to own as much as we can. We run new tech ideas by our clients first and as soon as we can find a handful who are interested in using it and incorporating it — we will pull the trigger and invest. Once we own it, we can help keep the price point down for those early adopters as additional renters spread out the cost. It’s all about: Can we predict it being used and will it help our clients across industries? If so, we will find the financing for it. Slowly we've built an incredible inventory. Now realistically we can't and don't want to buy every single new piece of technology that comes out — that wouldn't be practical. In instances where it doesn't make sense to purchase we leverage our longstanding relationships with industry-leading AV houses and technical directors.